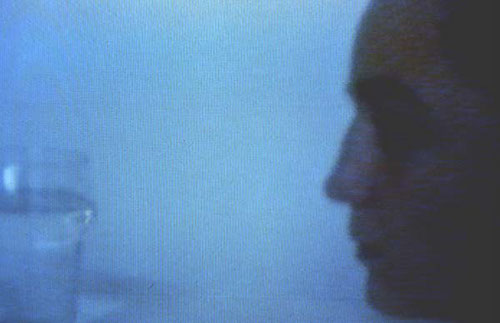 PDF of Interview with Antonie Frank Grahamsdaughter in January 2016 for EWVA.

Antonie Frank Grahamsdaughter was born in Toronto in 1955 and moved in 1962 to Sweden.

She studied at the College of Arts in Stockholm at the Department of Fine Arts and received her Master of Fine Art in 1984. In 1982 she made a year-long trip in Asia, particularly in India to photo-document her experiences.  Later she continued to travel in the middle east including Syria, Iraq and the West Bank to document current events in the area.

In 1984 she began to study at the Jan Van Eyck Academy Maastricht in the Netherlands, specialising in Time Based Art to develop her skills in media art, particularly video.

Video Installations became a natural part of her progression of the moving image to the spatial area. During this time video monitors were used as part of her installations. Grahamsdaughter used the human body for several installations as part of a wider context. She mostly worked with the existential questions of life and death.

During this time she created videos using chroma-key techniques where she experimented with moving image, colour and composition. Her work ‘Transit’ was shown at several festivals including Arnhuis, The Netherlands, video festival. The video was also selected to represent Europe at the ‘Kitchen’ in New York.

During her investigation of video media at Jan van Eyck Academie, she made several works like ‘Metamorforce’, a video installation with three monitors and ash formed as a triangle. The installation was shown at several places, among the Kruisherenkirke, Maastricht and the Rotor Gallery in Gothenburg.

In 1985 Grahamsdaughter experimented with several performance works with others in a group exhibition in Kruisherenkirke. Maastricht, The Netherlands. In the video-performance she was rolling between two monitors with sound and moving images.

She made several video installations and experiments during an intensive period of exploration of the moving digital image. The video installation ‘Whisper’ is a narrative interpretation of Life and Death. The work was filmed in Liege, Belgium, and in an eagle park in Aachen in Germany. The video installation was shown at Gallery Time Based Art in Amsterdam. Here she also worked with sound compositions and introduced her own sounds to the works.

In 1986, she traveled back to Sweden and started to teach moving image at Kulturama and the College of Arts, where she worked with video art and technology with students for some years. These were the first training courses in video and digital technology in Sweden.

In 1987 Antonie Frank Grahamsdaughter traveled to Iceland to participate in Reykavik Artfestivalen. During this visit she filmed a whale slaughter.  The material resulted in several works including ‘Slaughter’, ‘Next Day’ and various installations. The work ‘Slaughter’ was her first documentary work, which was used in several installations and video works.

Her interest in current affairs, in combination with the moving image is a significant theme in her work. She has continued to work with experimental digital moving image and has made over 40 works and installations that have been exhibited in Sweden and internationally.

During the late 1980s she gave birth to two daughters.  They appeared in several of her video works.

In the late 1980s, Grahamsdaughter began to experiment with live video and performance and worked at the experimental stage Fylkingen in Stockholm. She made several installations and working with musicians and choreographers. She curated several festivals at Fylkingen across various disciplines.

She continued to study advanced training in digital video and developed a research project titled ‘Survival’ at The Royal University College of Fine Arts, Stockholm (1998)