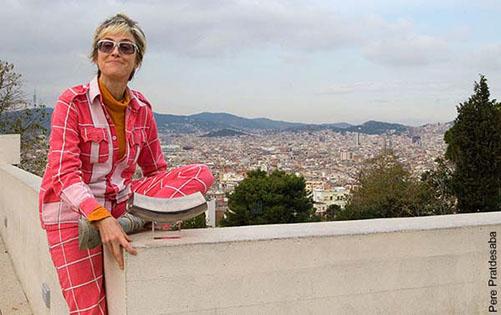 Pipilotti Rist burst onto the international art scene with visually lush video works and multimedia installations that explore female sexuality and media culture through playful and provocative remixes of fantasy and the everyday.

After working as a graphic designer in her native Switzerland, Rist gained a following in the mid-1980s as a member of the experimental post-punk pop group Les Reines Prochaines, for which she made some of her earliest video works. Rist created a series of music-based single-channel tapes that subvert the form of the music video to explore the female voice and body in pop cultural representations, merging rock music and performance with electronic manipulation.

Rist's burgeoning interests in all forms of electronic media production made her well suited for the wave of video installation that emerged in the art world of the early 1990s. Over the next ten years, she developed a video aesthetic that takes its cues from television and advertising, as well as from a rich history of feminist video work. Rist's achievement has been to join themes from this tradition with the influence of Nam June Paik and the hyper-kinetic aesthetic that he pioneered. The results have been successful and influential; Rist has become one of the most recognizable names in contemporary video art.

Rist's critical engagement is marked by a pointed exploitation of pop culture's investment in desire. Fantasy is at the heart of her work: her dream-like scenes often seem so loaded with suggestive images and scenarios that they threaten to collapse under their own meaning, saved, in the end, by her light touch and ironic humor. The willful performance of femininity — perhaps one of mass culture's foundational fantasies — functions, within the context of the pop video, as a tool or weapon. Rist gives the audience what it wants, and it is the resulting oscillation between voyeuristic pleasure and discomfited alarm that gives her work its ambiguity and impact.

"I have the greatest respect for some MTV clips," she has said, "since they have a power of innovation and a spirit of discovery that really surpasses video art." From her earliest tapes through her recent multi-media installations, Rist has crafted a body of work in which she appropriates this spirit for her own ends, exploring the intersection of sexuality, technology, and pop culture.

In 2008-2009 Rist's immersive, multimedia installation Pour Your Body Out, which was commissioned by The Museum of Modern Art, New York, filled the museum's atrium with twenty-five-foot-high moving images and sculptural seating.

Rist lives in Los Angeles, CA, and Zurich, Switzerland. She is represented by the galleries Hauser & Wirth and Luhring Augustine.